A Soldier's Story - Gen. Benjamin Maja Adekunle in his own words 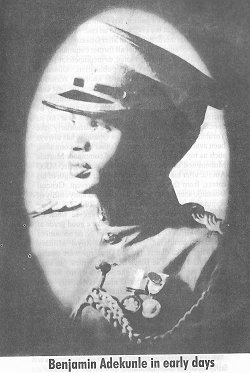 I was born in Kaduna on the 26th of June 1936, the fifth in a line of six children born by Amina Theodora to a polygamous husband, Thomas Adekunle. My father, a native of Ogbomoso, was domiciled in Kaduna as early as 1908. He had met my mother in her hometown Numan during one of his sojourns to the Adamawa Province and married her in 1919. She was a member of the Bachama Tribe, an ethnic group noted for their fighting abilities. As one of the earliest converts to Christianity in her area, my mother was a staunch Christian.

She succeeded in converting my father Thomas to Christianity in the course of their courtship and we were raised as Anglicans. According to the legend repeatedly narrated to me by elderly female relations during my childhood, the circumstances surrounding my early entry into the world were somewhat portentous. They say I overstayed my time in my mother's womb by two months. Moreover, I am reported to have vacated this comfortable abode only after a series of local birth attendants had exhausted their entire repertoire of childbirth skills. These tales meant little to me at the time, but their chief sigl1lficance was the special attention it secured for me from my family, particularly from my mother.

Both my father and grandfather served in the colonial army. My father later entered the carpentry trade where he made a sufficiently good living to fend for his large family of two wives (he later married a second wife, Christianity not­withstanding), a dozen children and numerous relatives. We all lived in the sprawling house that he built in the Kaduna township.

The outbreak of war in Europe in the 1930's precipitated dramatic changes into our small world. The war transformed quiet retiring Kaduna into a bustling military cantonment and gave me my first glimpse of military life. I was spellbound by the towering, khaki clad men who strode about and filled our small town; fascinated by their bizarre clothing gray puttees, wide brimmed jungle hats and frog nosed boots; in awe of their booming voices and intrigued by the long objects slung over their shoulders. Moreover, the superior status that those mysterious beings occupied above the residents (their every command drew instant and complete obedience from civilians of every rank), made a deep impression on my boyish mind.

I spend every possible moment huddled in one comer of the army barracks or the other, drinking in the shouting, the marching and the salutes. My siblings soon learned to be head straight for the barracks whenever I was found to be missing.

The outbreak of the war in Europe also brought changes at a more personal level: my father Thomas, my most senior brother, and my uncle were all enlisted in 1942. The loss of primary breadwinners of our family had obvious economic implications for our large family. I was sent to Idah to live with my senior brother in 1942. At the time, he was full corporal stationed at the army pay office. It was at the Roman Catholic School at Idah that I commenced my formal education. In late 1943, I was joined at my brother's home by two half-sisters and two half-brothers. My happiness at their arrival (calculating that the burdensome household chores would be lightened) soon evaporated. In retrospect, this is the period at which my childhood proper can be said to have ended. The conditions in my brother's home and my experiences at the Roman Catholic School, Idah, compelled me at a very early stage, to develop character traits which were beneficial to me in large stages of my life.

In spite of the extended period of nurturance in my mother's womb, I was born small and retained this diminutive stature throughout my life. Away from the protective arms of my mother, my slight frame attracted bullies the way a beautiful damsel attracts suitors at school, in my new neighbourhood, everywhere I ventured, larger boys regarded me as easy prey. To survive, I learned to return three blows for each received without provocation. I also learnt the effectiveness of what in military language, is termed 'psychological warfare.' Make sufficient noise, look sufficiently threatening, and you will have your would-be killers running or at least disoriented in a fight. Over time, my willingness to engage all comers, earned me the nickname Maja ('don't fight') in the Yoruba language.

On the home front, with wartime shortages and disciplinarian guardians, I learned to vocally express my needs in the competition with my half-siblings for scarce resources. To supplement the inadequate quantities of food available to us at home, I took to selling water and chopped wood in the streets, rather than starve to complain. My small scale business, conducted after household chores, fostered a spirit of independence in me, youthful though I was and demonstrated to me in concrete terms, the benefits that could accrue from initiative, resourcefulness and hard work. I never forgot this lesson.

At the Roman Catholic School, it was more of the same the primary instrument of inculcating knowledge in pupils was the cane. On the slightest pretext, the schoolmasters liberally applied this on pupils. I received my fair share of the discipline and very soon, more than my fair share. Unlike some of my fellow pupils, my response to the excessive discipline was defiance: the more I was caned, the more I rebelled against what I then perceived as unjustified treatment. I recall on my an occasion, ruminating (while nursing a sore bottom), on the contrast between the love for humanity expressed to be the ideal of every Christian by my Masters and the violence and humiliation inflicted by the very same Masters before, during and after Mass. My experiences at this institution left me with a lasting mistrust of organized religion and the sincerity of its representatives. I have since seen little to change my mind.

By 1945, at the age of 9, I had enough of both school and my unsatisfactory home life. The death of my father in this year strengthened my resolve to take matters into my own hands. I resolved to leave home and look for someone to serve, in exchange for educational support. On the chosen night, I gathered my few belongings and ran away from brother's home. After several days on the streets, I found my way to one Reverend Ayiogu, whom I persuaded to employ me as a domestic servant at the rate of one shilling and six pence a month. With the assistance of the police, my elder brother soon traced me to my new living quarters. However, all entreaties, commands, cajolery and threats directed at me by the police officers, relations and the Reverend to return with my brother fell on deaf cars, with the Reverend Ayiogu I would remain ... or vanish again.

From this period, the int1uences to which I was exposed were more stabilizing. The Reverend proved to be a decent man and I lived with him for two years. By 1947, I came under the protection of a new Master. Under his guidance, I earned a scholarship to Dekina School in Kwara State. My new Master was an extraordinary man though unimposing in appearance.

In all the years I spent in the home of Mr. Quinni, a native of Ugep and employee of the Igala Native Authority, he never once raised his voice in anger. He was scrupulously just in his dealings with all persons around him. He was gifted with a formidable intellect, which was brought to bear in every situation. I was fascinated by his ability to win any argument by rigorous analysis. By the time he reached his conclusion, the parties present had little option but to agree, regardless of their own initial positions or whether his conclusion conflicted with their own interests. It was for this reason that his polygamous home was calm, stable and peaceful. Mr. Quinni taught me the strength in meekness, the honour m humility and the dignity in labour. If I have not always succeeded in exhibiting these qualities, he blessed me with the ability to appreciate and esteem them in others. .

Under his influence, I thrived at my new school (Dekma Primary School) to the extent that my progress caught the attention of the Headmaster Dokpong. Among the schoolmates at Dekina was one time Director of the Nigerian Twelve Corps Service, Colonel Ahmadu Ali, who is s~il1 a friend. I passed the entrance examination to Okene Middle School in 1951 and left Dekina with many happy memories.

After my primary education, my relatives in Idah attempted to reassert their claims over me. According to their plans, I was to stop schooling and be apprenticed in the family trade of carpentry. Needless to say I vehemently resisted this plan as my years with Mr. Quinni had the effect of dolling on me, a powerful thirst and respect for western education. My stubbornness on this point served to sever all pretense of supervision over my welfare by my guardians. It was not clear to all that I was on my own. I was given to understand that I should expect no support from them. I steeled my mind to fend for myself, to plough a lonely furrow and take life as it came. Fortunately, for me those were the days of free education.

To Okene Middle School I went. I met other interesting characters such as Mr. Bolujoko who we had nicknamed 'the black horse of Okene Rock.' Though an almost fanatical disciplinarian, Mr. Bolujoko, like my former Master, possessed the ability to inspire the best of anyone and nurture the one's more positive qualities. Despotic though he was, he personified to his students the modernised and educated man. In addition to academic development, Mr. Bolujoko took great interest in the spiritual development of his students. The principles he took great pains to inculcate in us is best summed up thus:

The chessboard is the world, the pieces are the phenomena of the universe, and the rules of the game are what l1'e call the Laws of Nature. The player on the side is hidden from lies. We know that his play is always fair, just and patient. But also we know to our cost, that he never overlooked a mistake or makes the smallest allowance for ignorance.

We were compelled to practice his precepts of Christianity to the letter. Unfortunately for me, he found many of my opinions on organized religion grossly unacceptable and never felt shy to express his displeasure with my unorthodox views through lashes. In those days, the Middle School era dovetailed into the Junior Secondary School stage. We were made to forgo two years of studies to benefit from the new surge of educational awareness in the then Northern Region. I gratefully seized the opportunity of free education. For Mr. Bolujoko, I have nothing but unreserved praise.

As the years rolled by, Mr. John Rimmer, the School Principal, introduced us to the countryside game of cricket; I was appointed fatigue master, then boxing captain, assistant prefect, then full prefect. All too soon, adulthood loomed, and the School Career Board called me up to discuss my future. Two options were open to me going to a university or joining the army. The School Board strongly recommended the former, I chose the latter.