In The Presence of Over 5,000 Spectators

S.L.A Says: The Past Of Colonial Imperialism Was A Colosal Failure, Its Present Is A Morass Of Confusion, And Its Future Is Anything But Certain

Last Saturday evening (April 15, 1944) a public lecture was delivered under the auspices of the Ogbomosho Youngsters' Improvement League on the subject “Past, Present, and Future of Colonial Imperialism”.

The lecture was well-attended and presided over by Mr. Herbert Macaulay, C.E. , F.R.G.S. After the Chairman was introduced in choice words by Mr J.O. Adigun, the Secretary of the League, he opened by saying how gratifying it was for him to preside over the lecture in the first place, he said his grandfather, the late Ojo Oriare, hailed from Ogbomosho whence he joined in war as an ally of Oyo and Ibadan. Consequently, Ojo Oriare settled in Ibadan from where the fortune of war turned against him and he was captured and sent into slavery. On the high seas he was rescued and sent to Freetown as a free man.

At the time Mr Herbert Macaulay's father was born Mr Zachary Macaulay was the Governor of Sierra Leone. As a mark of respect or deep appreciation for this Governor the late Ojo Oriare christened his son Babirgron Macaulay. Mr Herbert Macaulay explained that that was the reason he had to bear the name “Macaulay” and not Oriare. For his connection with Ogbomosho he remains profoundly happy to preside over the lecture. His personal regard for the lecturer whom he had known for years also made him happy to preside. 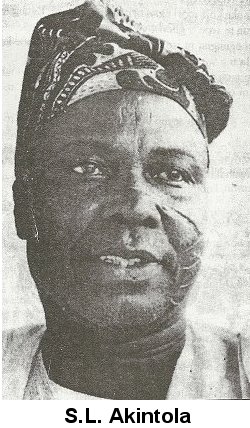 He then introduced the lecturer who declared, “The past of Colonial imperiliasm was a woeful failure; its present is a morass of confusion, and its future is full of gloom.” Mr Akintola said the factors determining human relations are economic. Throughout history the principal causes of war and international crisis have always had something to do with food, shelter, and perhaps clothing. These have always been individual as well as national problems. The lecturer said that it was significant that the first calamity that befell man in the garden of Eden had to do with this question of food. The Canaanites were forced to look to Egypt for protection because Egypt by reason of the fertility of the Nile Valley was a great source of food. Consequently according to history, lorded it over the Canaanites. “But history abounds in large numbers of contradictions. In the past, the country which had food was master of the country which had none. In modern times it appears the contrary is the case.”

As food was a dominant factor in determining International and inter-racial relations, so was labour. From 2200-1205 Khula popular in blakry as the Cheop of the Greeks engaged several thousands of people for the purpose of building the great pyramids of Egypt. The labour was supplied from Babylon and Assyria. In order to ensure free and adequate flow of this labour there were wars of conquest. Egypt, held sway over Babylon and Assyria. In order words exploitation of the subject peoples was one of the motives of this brand of colonial imperialism. Egyptologists fix the period during which Egypt was an imperial power as varying between seventeen and twenty centuries. A later historian Myers said it was from 900 to 600 B.C. About 600 years before Christ, Egypt''s power waned as did that of Ethiopia before her and she became a tributary to Babylon and later bowed beneath the Persian yoke. Thus the imperial master of the past became partner or servant of later years.

The Babylonian and Assyrian Empire which rose after the collapse of Egypt also sprang from the same spirit of exploitation. As a result of internal jealousies we had one city-state and its gods fighting against other city-states and their gods principally for lion's share of the booty secured from colonial empires of Babylon and Assyria. The same spirit of exploitation made itself manifest. About 3000 B.C. Sargon, the Semite King of Akkad conquered Babylon. The main cause of this war was the profitable feature of colonialism. The nation which had no empire believed that her poverty, or comparative less affluence, was due to her non-imperialistic policy.

ONE MOTIVE IN ALL

The lecturer cited historical references to show that the later empires like those of Assyrian, the Chaldean, the Persian, the Greek and the Roman might have certain motives which were defensible, but there is one motive which happened to be the most indefensible throughout history, and that was exploitation of colonial peoples by the imperialist powers. No one would deny the great contributions made by the Greeks towards the progress of mankind. Similarly, the Roman Empire contributed perhaps more than any ancient empire towards what we know today as western civilization.

Both of them, during the height of their power, carried the touch of knowledge to the remotest part of their empires. Still, neither of the two great empires sprang exclusively from the spirit of altruism and benevolence. In international relations, man has not risen to the height where his vision will remain untainted by selfish motives. That was why the Egyptian Empire collapsed. That explains the fall of the Babylonian and the Assyrian Empires. In that we perhaps find the reason why the majesty that was once Ethiopia now becomes a mere incident of history. The glory that was Greece disappeared, and so did the grazdens that was Rome. No one nation ever in history desired to be under perpetual tutelage of another, and no one nation throughout history has held control over the other exclusively by reason of humanity and benevolence.

As one time Rome controlled greater part of Western Europe including England which remained under her tutelage for over four centuries. During the period Rome evangelised Britain. But did Great Ceaser conquer the Gauls merely to evangelise them? Britain struggled and freed herself from the Roman yoke. Why did the subject peoples struggle to free themselves from the imperial yoke?

Impero! Was a blessed word to him that has the power! Impero! What a cursed word to him that not ! Impero ! I rule ! I command! I govern! I conquer! I counsel! I subjugate! What self-respecting nation on God's earth would like to be ruled, to be commanded, to be governed, to be conquered, to be controlled, and to be subjugated perpetually? None! One may wade throughout the pages of history – ancient, modern, or medieval or even cast a glimpse through the maze of futurity he would fail to find one. What a repugnant word to the so-called subject people of the earth! It is a direct negation of the nobleness of the human soul.

Adventures of the great Dutch, Portuguese, Spanish, German, French, British and Italian discoverers who discovered the parts of the world which today constitutes colonies of European powers could in no way be separated from self-motives. The dominant urge was one of exploitation. The lecturer said he admitted that there were some defensible motives. The more advanced peoples, for instance, came out to open the eyes of the backward peoples to the full luminosity of Christian civilization. They came to redeem them from the perdition of hell to which their paganism tended. They came to free them from the ravages of diseases and pestilence. But they also came to source raw materials and cheap labour. While the former motive is defensible, the latter is less so, and therefore we hear very little about it.